The 1994 amendments to the Marine Mammal Protection Act (MMPA) included Section 119 to allow the Secretaries of Commerce and the Interior to “enter into cooperative agreements with Alaska Native organizations to conserve marine mammals and provide co-management of subsistence use by Alaska Natives.” Implicit in Section 119 is the belief that a cooperative effort to manage subsistence harvests that incorporate the knowledge, skills, and perspectives of Alaska Natives is more likely to achieve the goals of the MMPA than is management by the federal agencies alone.

Agreements “may include grants to Alaska Native Organizations for, among other purposes,

ANOs with Co-Management Agreements with NMFS

ANOs with Cooperative Agreements with FWS

Alaska Nannut Co-management Council – polar bears (in process of establishing a cooperative agreement with FWS as the successor organization to Alaska Nanuuq Commission, which is no longer active)

Since 1994, the National Marine Fisheries Service (NMFS) and the U.S. Fish and Wildlife Service (FWS) have entered into agreements with several Alaska Native Organizations (ANOs) involving 11 marine mammal species (see links at right). ANOs are authorized by tribal leadership to enter into specific co-management or cooperative agreements. The agreements vary in content by species, ANO, and agency but generally describe harvest monitoring methods; collaboration on research, education, and outreach projects; required funding; means to resolve conflicts; and procedures for terminating the agreement.

In 1997, NMFS and FWS entered into an “umbrella agreement” with the Indigenous People’s Council for Marine Mammals (IPCoMM), which was revised in 2006. The umbrella agreement provides a foundation and a direction for developing co-management agreements between ANOs and federal agencies. IPCoMM was given the authority to enter into this umbrella agreement by authorizing resolutions from the Alaska Federation of Natives and those tribally authorized ANOs that are members of IPCoMM.

Co-management efforts have integrated the field skills and indigenous knowledge of Alaska Native hunters and subsistence users with the scientific and technological expertise of scientists to enhance understanding of marine mammals in Alaska, including their stock structure, status, trends, movement and habitat-use patterns, responses to climate change, animal health and condition, contaminants, and disease. Sampling of Native-harvested animals for scientific purposes (often referred to as biosampling) has provided marine mammal tissues for a variety of studies. Education and outreach efforts co-led by experienced hunters and resource managers reinforce sustainable hunting practices, and familiarize Alaska Native youth with cultural and subsistence traditions. Such efforts contribute significantly to marine mammal conservation and the maintenance of subsistence cultures.

What the Commission Is Doing

In February 2008, the Commission held a meeting in Anchorage, Alaska, to review co-management, to assess progress of cooperative  agreements in conserving marine mammals and providing co-management of subsistence use by Alaska Natives, and to identify ways forward. For more information, see the report Review of Co-Management Efforts in Alaska.

During the October 2016 meeting of the IPCoMM Board of Directors, the Board indicated that a review of marine mammal co-management, following up on the Commission’s 2008 review, would be very timely to help address growing issues for co-management partners. With the support of the Eskimo Walrus Commission, the U.S. Fish and Wildlife Service, and the National Marine Fisheries Service, we submitted a proposal to the North Pacific Research Board (NPRB) in December 2016 to evaluate the effectiveness of co-management under the “Human Dimensions” category. The proposal was recommended for funding by the NPRB and approved by the Department of Commerce in July 2017. The project was conducted in 2018 and finalized in 2019. 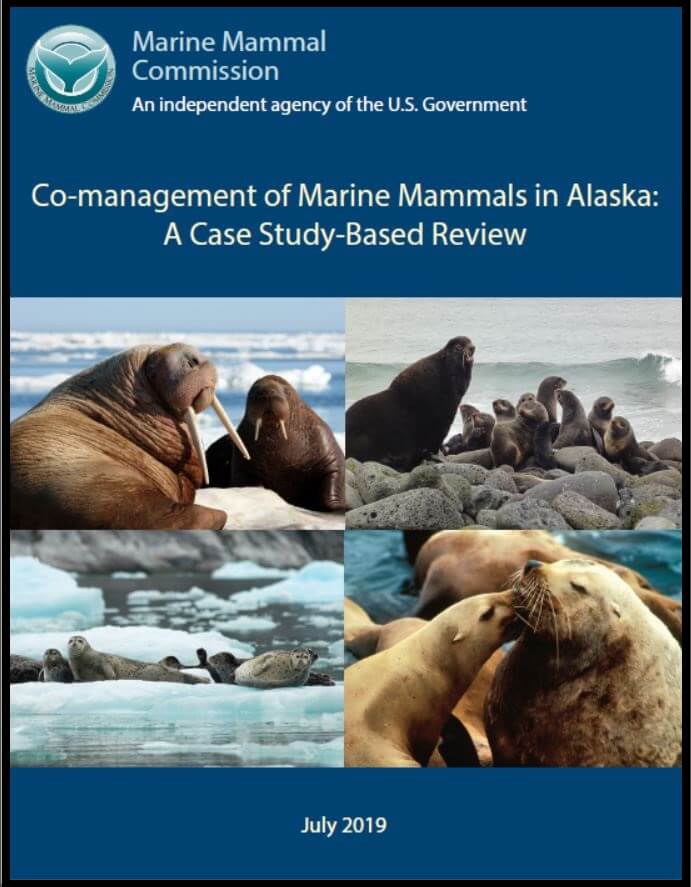 More information about the project objectives and approach can be found on the Co-Management Review Project webpage.

Check out the final report for the Co-management of Marine Mammals in Alaska: A Case Study-Based Review

The 20-year history of co-management of marine mammals between federal agencies and Alaska Native organizations prompted the Commission to ask whether lessons learned from successful co-management activities could enhance the federal government-to-tribal government consultation process in Alaska.

Executive Order 13175 directs federal agencies to consult with American Indian and Alaska Native tribes on policies, regulations, legislation, and other actions that may have tribal implications. This includes actions affecting not only marine mammals but also all other tribal resources (natural, cultural, and socioeconomic). The Commission believes that the existing tribal consultation processes in Alaska could be strengthened to ensure meaningful, timely, and coordinated input by Alaska Native communities on issues involving marine mammals and their availability for subsistence.

In December 2012, the Commission, in collaboration with IPCoMM and the Environmental Law Institute (ELI), convened a meeting to review and seek ways to improve the tribal consultation process. Participants included representatives of various federal agencies, ANOs, other Alaska Native tribal members, and public and private stakeholders. Several meeting participants suggested that Alaska Native communities should develop guidance on how the tribes themselves would like federal agencies to conduct consultations related to actions that may affect marine mammals. For more information, see the summary of the Commission meeting on Consultation and Co-Management.

In October 2014, the Commission contracted with ELI to work with IPCoMM, ANOs, and others to develop model procedures for government-to-government consultations with Alaska Native tribes under Executive Order 13175 and related directives. The objective of the project was to assist Alaska Native communities in the development of model consultation procedures regarding policies, regulations, legislation, or other federal actions that have tribal implications. The model consultation procedures would draw from the experiences and lessons learned from marine mammal co-management and cooperative agreements to improve and strengthen consultations involving Alaska Natives.

ELI convened an advisory group with expertise in marine mammal consultation and co-management to help guide the project, with assistance from IPCoMM. The draft procedures were reviewed by Alaska Natives and several federal agencies. ELI issued a final handbook outlining model consultation procedures in January 2016.

In response to a 26 January 2021 Presidential Memorandum on Tribal Consultation and Strengthening Nation-to-Nation Relationships, the Commission has reviewed and updated its 2010 Action Plan for the Implementation of Executive Order 13175 regarding Consultation and Coordination with Tribal Governments. The Commission developed its original action plan in 2010 pursuant to President Obama’s 5 November 2009 Presidential Memorandum Concerning Tribal Consultation under the Executive Order. The Commission coordinated its review of the plan in Alaska through the Indigenous People’s Council for Marine Mammals (IPCoMM), a consortium of Alaska Native Organizations (ANOs) focused on marine mammal issues. The Commission’s Chairman and Alaska Native Liaison participated in IPCoMM’s 15-16 July 2021 Board of Director’s meeting, at which they gave a presentation and received comments on the revised action plan. Subsequent to that meeting, the Commission sent the plan for comment to all 14 Tribally authorized ANOs and Native villages that are members of IPCoMM and separately to two other Tribal villages at the request of ANOs. In addition, the Commission sent the plan to other ANOs and regional organizations that, although not Tribal entities, represent Alaska Natives on marine mammal issues. In all, the Commission sent the plan to 22 ANOs, Alaska Tribal villages, and Alaska regional organizations for review and comment.