The Economics of Marine Mammals

Good for Business, Good for Wildlife

Economic incentives can, at times, be more effective than regulations in achieving conservation.

Conserving marine wildlife benefits communities all across America. Studies have shown that certain species of marine wildlife, including whales and dolphins, are increasingly important drivers of economic growth for tourism and related industries. Marine species also have inherent value to the American public. Many people want to know that these animals exist, even if they never see them in the wild.

A 2011 study focused on public willingness to pay to downlist or delist endangered and threatened species. Three marine mammal species were included in that study—the North Atlantic right whale, North Pacific right whale, and Hawaiian monk seal. All are critically endangered species found in U.S. waters. The study estimated that U.S. households are willing to pay an average of $71.62 and $73.16, respectively, for the recovery of the two right whale species, and $66.31 for the recovery of Hawaiian monk seals. These types of studies are critical to understanding human perspectives regarding the inherent value of recovering marine species. They are also critical in helping to balance the costs and benefits of conserving marine species with the economic needs and values of coastal communities.

What is an ecosystem service?

According to the National Academy of Sciences, ecosystem services are defined as “benefits that people receive from natural resources.”

The benefits of conserving marine species stem not just from non-consumptive uses, as noted above, but also from the value of the “ecosystem services” provided by the species.  For example, large whales have been shown to have a role in enhancing primary productivity of marine ecosystems by concentrating nitrogen near the surface through excretions, a process known as “the whale pump.” The enhancement of primary productivity in coastal waters is a type of ecosystem service, in this case resulting in more productive fisheries and, ultimately, increased revenues and employment in the fisheries sector. The economic contributions of one whale over its lifetime are estimated at over $2 million, and over $3 trillion for all large whales combined.

Considering the economic impact and value of marine mammals in a comprehensive, incentive-based approach to management can improve public policy, foster public interest and engagement, and lead to more informed decisions that ultimately benefit marine mammal conservation efforts. It can also improve equity among stakeholders. Through analyses of the economic forces that drive and perpetuate the challenges facing our most vulnerable resources, a better understanding can be gained of the links between the resources themselves and the people and communities that depend on and interact with them. In turn, understanding these linkages can help to prioritize policies based on economic incentives rather than unnecessarily burdensome regulations. 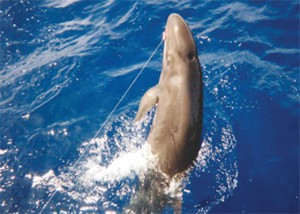 Bycatch, the incidental catch of non-target species in active or discarded fishing gear, is the greatest threat to marine mammals around the world, contributing to the deaths of around 300,000 whales, dolphins and seals every year.  From an economist’s perspective, bycatch represents a negative externality, defined as an unintended consequence of economic activity that is not reflected in the price of the target catch. If the true cost of bycatch was incorporated into fishery operations, both fishing costs and the market price of seafood would be higher. This would provide an incentive to reduce bycatch through technological innovations and more targeted fishing practices. To encourage these changes, researchers have suggested that policy makers consider approaches like tradable bycatch quotas or credits that encourage vessels to minimize the unintended consequences of fishing in order to maximize net earnings. A new computer technology, blockchain, has the potential to revolutionize the tracking and traceability of seafood products, and to make that information available to everyone.

In addition to the costs imposed by requiring reductions in marine mammal bycatch in fishery operations, the benefits of reducing marine mammal bycatch must also be considered. One study has shown that reducing lobster fishing effort to support protections of North Atlantic right whales may in fact increase profits and help sustain the fishery into the future. Reducing marine mammal mortality could also increase revenues for ecotourism operators, as well as for the numerous businesses that benefit indirectly from the tourism industry. Research that estimates expenditures and value of marine mammal-related tourism is necessary to clearly identify and incorporate this value into future management discussions.

Bycatch, to economists, is a “negative externality.” What does that mean?

Imagine that you go fishing and catch five fish, including three that you wanted to catch and two that you caught by accident. When you sell your three fish (the target species), their price likely won’t include the effects that angling had on the two non-target fish (the bycatch in this scenario). The capture of these two individuals is a negative externality because it was an unintended consequence of catching your target species and because the effects of removing those bycatch species aren’t incorporated into the cost of the target species at market. In this scenario, the fishermen and the fisheries resource both lose. Putting a price on bycatch could internalize this cost and incentivize its reduction—a crucial step needed to achieve the sustainable management and fair use of our natural resources.

A whale of a time

Wildlife viewing contributes revenues and jobs to coastal economies and provides an unforgettable experience to countless ecotourists every year. (WDC)

Marine mammals drive local business and communities, both in educational, public-display facilities and in the wild. In 2016, over 90 million people in the U.S. paid an average admission price of $22 to visit institutions accredited by the Association of Zoos and Aquariums that housed marine mammals. In just that one year, approximately $2 billion in expenditures supported nearly 15,000 full-time jobs, a reflection of the value of being able to see and learn more about marine mammals in the United States.

Marine ecotourism has also become a lucrative industry, now producing more revenue than aquaculture and fisheries combined. In 2012 the whale watching industry generated approximately 2 billion dollars in revenue and supported roughly 13,000 jobs worldwide. One study found that over 1.3 million people spent a combined $12 million dollars per year in the Southern Hemisphere for tickets to view pinniped rookeries and haulout sites. Companies specializing in marine mammal viewing run daily trips up and down U.S. coastlines and around the world, with prices are as high as $250 a day to view humpback whales in Tonga or $230 to observe gray whales in Baja California, Mexico. Ecotourism has thus become a vital part of coastal economies and can foster public appreciation for marine wildlife while simultaneously providing local communities with a long-term source of jobs and revenues.

However, marine mammal viewing can also lead to unintended ecological consequences for certain species, and management actions may be needed. For example, commercial whale watching boats in the Salish Sea are known to disturb critically endangered southern resident killer whales (SRKWs) with both their presence and the noise they generate. SRKWs respond to vessel presence by altering their behaviors and vocalizations. To reduce the impact of vessels on SRKWs, the Commission recently recommended to NMFS that all “on the water” watching of SRKWs be suspended until a permit system is in place. The Commission also encouraged NMFS to restrict the number of vessels, vessel speed, and the duration of vessel time around a group of SRKWs.

In Hawaii, dolphin-watching tours that target resting spinner dolphins may be compromising the health of individual dolphins as well as the population as a whole. This issue, as well as a pending NMFS Proposed Rule to reduce harassment of spinner dolphins, were discussed at length during the Commission’s recent annual meeting in Kona. Strong support was voiced from numerous stakeholders, including tour operators, for the implementation of bay closures to swimmers and vessels during critical spinner dolphin rest hours and the establishment of a minimum approach distance to spinner dolphins. NMFS intends to finalize this rule by the end of 2020.

The International Whaling Commission also developed a digital Whale Watching Handbook to ensure that best practices are employed worldwide during marine mammal viewing trips. The handbook is intended to be an evolving resource for managers, regulators, and industry operators and has been translated into multiple languages, with more to become available soon.